Walking with My Camera: Bear Tracks and Remembering 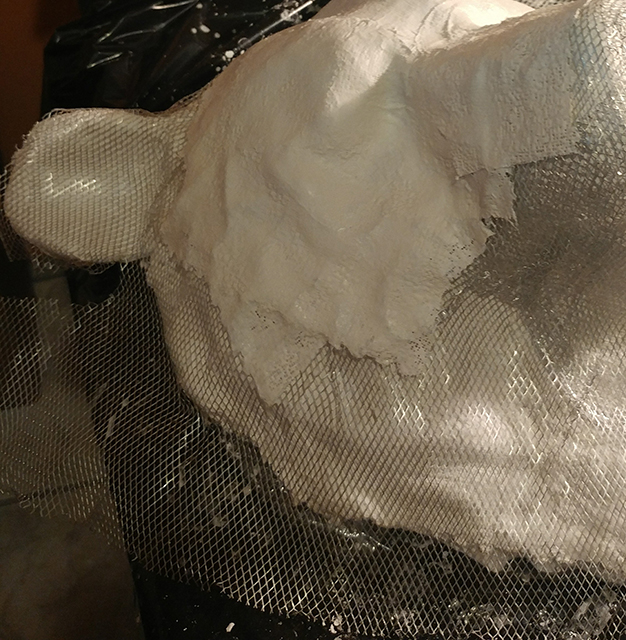 As I work on what will be a bark bear head sculpture, I have been thinking about my relationship with bears. I am starting to see bear tracks on my walks. A couple days ago I saw grizzly tracks. In my thirty-seven years of walking this land where I live I have only seen a grizzly two fleeting times in this area. Update: In September 2018 I asked Stacy Courville, a wildlife biologist for the Confederated Salish Kootenai Tribes, about these tracks. He said they were the tracks of 3.5 year old male grizzly named Baptiste. The bear did ok on this side of the mountains but then got into too much trouble over on the Seeley Swan corridor and was euthanized. I was sad to hear that news. 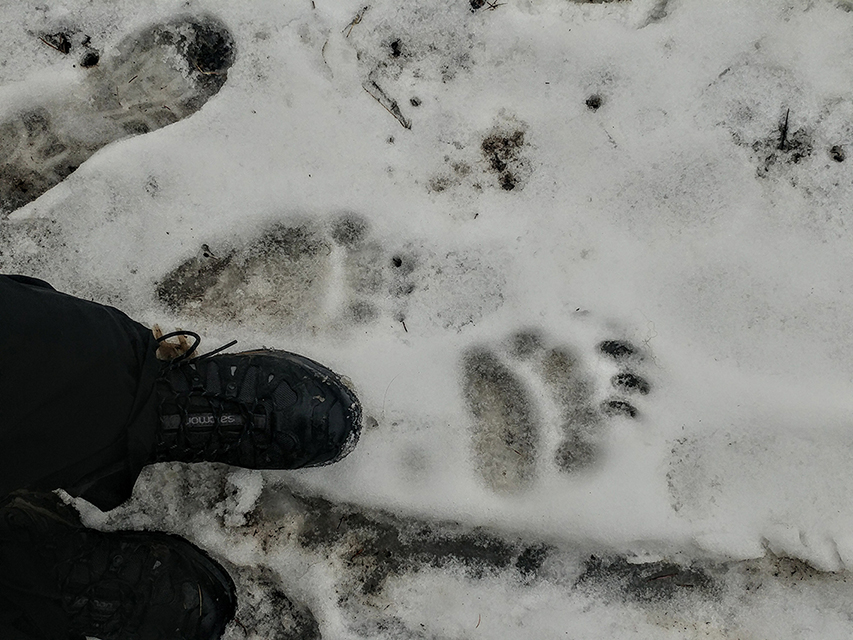 Living next to tribal forest land we see black bears regularly as they forage between the wilder lands and the Jocko Valley. When I walk I am alert for the mama bears and cubs. Especially in the spring when they are hungry. When I see them, I give them plenty of space, and we work it out. Sometimes the mamas clack their teeth and make noise to make sure I get it. I have only been chased by a mama bear once. I was walking to visit a neighbor and when I was about twenty feet from their front door a mama charged out of some bushes at me. I ran into the house slamming the door behind me with a “sorry I didn’t knock.” The mama had been in the brush watching her two cubs that were about thirty feet up in a Ponderosa tree near the house.

We see more bears when the service berry and chokecherries are ripe and then again in the fall when bears come down for the fruit in people’s yards and for the wild apples that have grown up from seeds in bear scat. 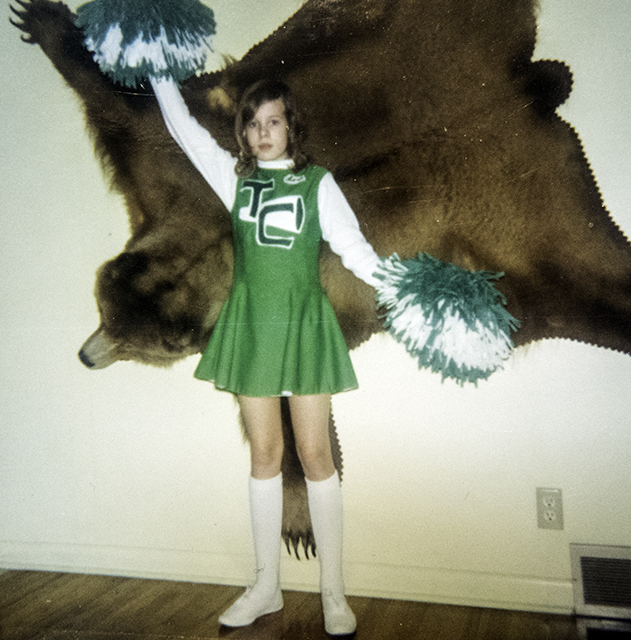 When I was growing up, we had a young alaska brown bear skin rug in our house.  My dad had killed it but he always seemed to be kind of sad when asked about it. The bear rug was part of our everyday life and often included in family photographs. My parents would take it down and photograph me and my siblings in matching red and white striped flannel pajamas snuggled on the bear at Christmas or would pose us in front of the bear. Here’s a photo of me in my cheer leading outfit in fifth grade. I remember touching the bear. Some of the hair was coarse and in other areas, like behind the ears it was softer. 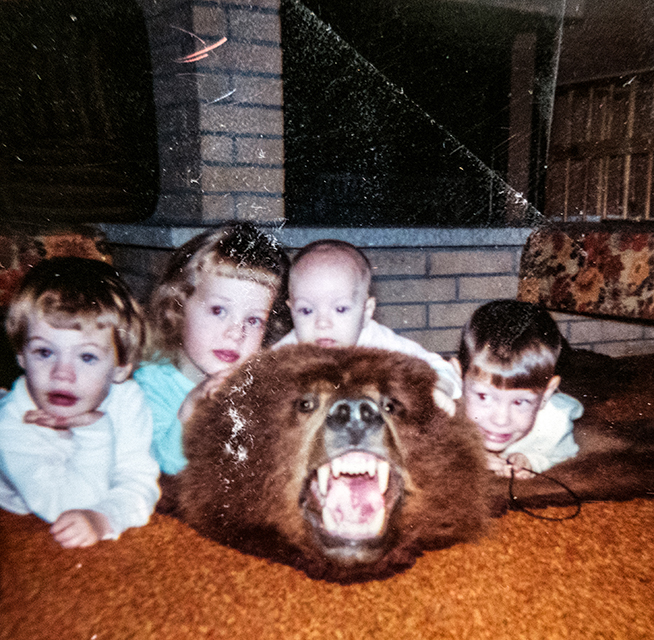 Me and my siblings with the bear

My dad was a hunter from an early age. It was one way to escape from where he lived in Brooklyn, New York and get into the woods. He wasn’t a city guy and came west when he was seventeen. He deeply respected wild animals and taught us to respect them. The cartoon and Disney versions of animals disturbed him, and he didn’t like the cute and cuddly depictions of people and wild animal interactions. In his experience it led to people doing stupid things like wanting to “protect” a wild baby animal or take close-up photographs of themselves next to wild bison.

My dad was a forest ranger and from age ten to eighteen years old I lived at Murphy Lake Ranger Station. We were only about an hour away from Glacier National Park (Montana). I was ten years old in 1969 when the book Night of the Grizzlies came out. It was about when two young women were separately attacked in Glacier National Park, by grizzly bears in 1967. I didn’t read the book until I was thirteen, but the story was part of our lives. Humans had a long history of feeding and improperly storing food and food waste in the park “acclimating the grizzlies to their presence and making them associate humans with food.” The deaths led to major changes in human behavior in the park.

In my tween to early teen years the intensity of the story filled up my dreams. In one dream I was walking in the woods near my home and there were twelve grizzly bears I was trying to avoid. My fears were amplified when we would go camping.  I would lie frozen inside an army issue mummy bag imaging my dad’s snoring was a bear outside our tent.

In my early twenties I moved to the Flathead Reservation of the Confederated Salish and Kootenai Tribes and I learned more about living with bears. I am grateful to be able to experience bears in my life. I am grateful for my dad and how he taught me to respect and appreciate our wild lands and wild creatures. 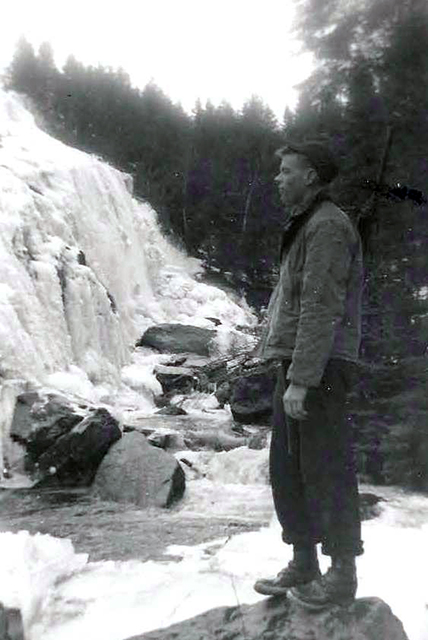 A picture of my dad in 1949 at age 19. The caption on the photograph says it was taken at Indian Falls (Colorado I think) and it was -25 degrees.

When my dad got older he stopped hunting. He couldn’t kill animals anymore. His respect for them evolved into a joyful appreciation and then toward the end of his life he was devasted by human caused environmental destruction. After the Gulf BP oil spill in 2010 he would watch the news and mourn for the wildlife that had been killed and harmed.  I will be thinking about my dad as I walk in the rain, snow, rain and work on my bear sculpture. 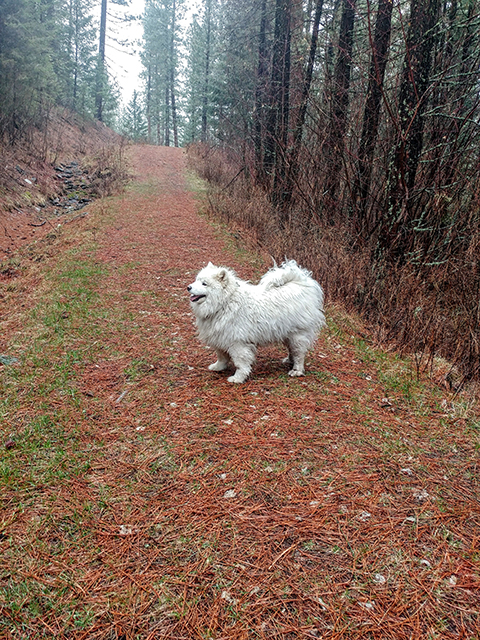 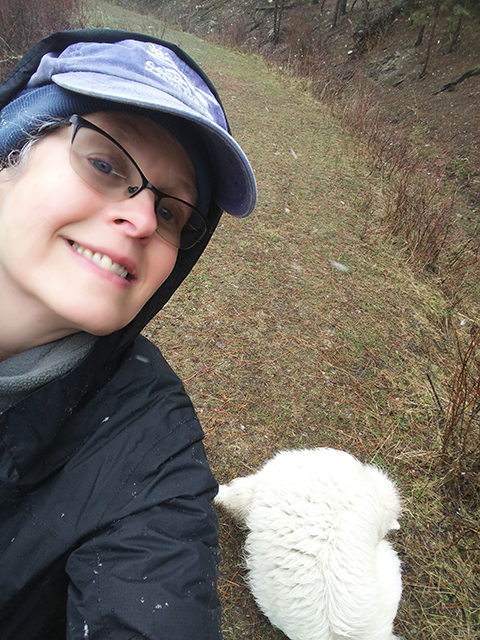 Jordy the Samoyed returned to living with her primary person, but she got to come and visit for a few days.